Outstanding example of a 1970’s traditional Navajo squash blossom. Measuring 15″ in length plus a 1″1/2  x  1″3/4 Naja. The Navajo artist has hand cut 25 turquoise stones, 22 in the blossoms and 3 in the Naja. Sheet silver, twist & triangle wire along with handmade beads are used in the crafting of this squash blossom. Beautifully sized and easy to wear. 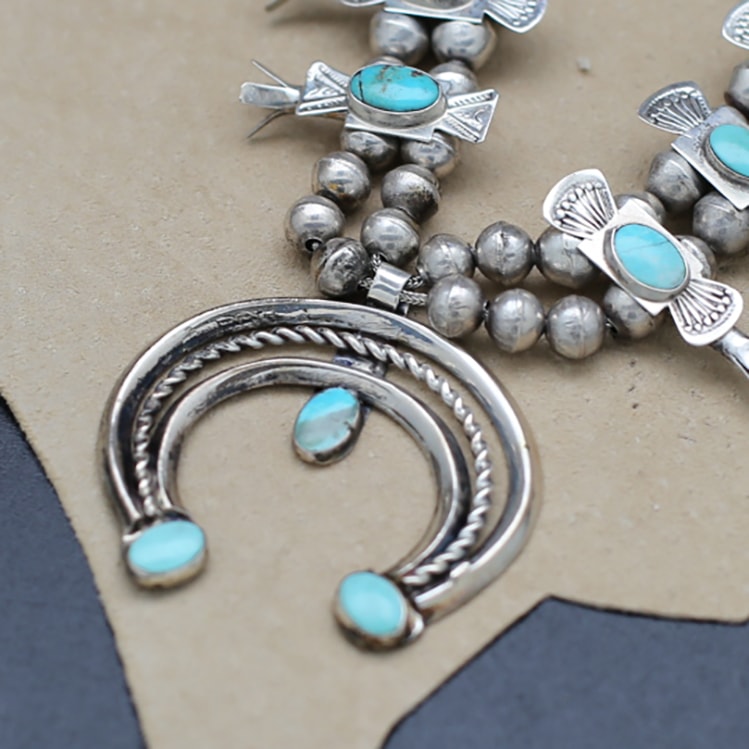 SQUASH BLOSSOM NECKLACE: While squash blossom imagery can be found in petroglyphs (rock art) that pre-date European contact in the Southwest, Dubin said the squash blossom necklace was created in the late 1870s or early 1880s after the native people of the area contacted Spanish Mexicans. The Navajo, it is believed, were the first tribe to adopt the design, but by the early 1900s, the art form had spread to neighboring tribes, including the Zuni and the Pueblo. While the entire necklace has taken its name from one type of bead, the classic squash blossom necklace has three distinct parts: the plain round beads; the round beads Naja. It is also representative of the womb, and when a squash blossom necklace features a single turquoise nugget suspended from the Naja, it is often interpreted to be symbolic of a child in the womb.