Vintage 1960’s one of a kind Rainbow  man cuff bracelet. Handcrafted by a husband and wife Zuni artist team of Dexter & Rosemary Cellicion. Measuring 1-5/8″ at its widest point and tapering down to 3/8″. Outstanding detail is seen on the stamping of the triangle wire that forms the basis of the bracelet. Hand cut silver outlines the image of the knife wing man. A true window into how Zuni jewelry was made 50 years ago. 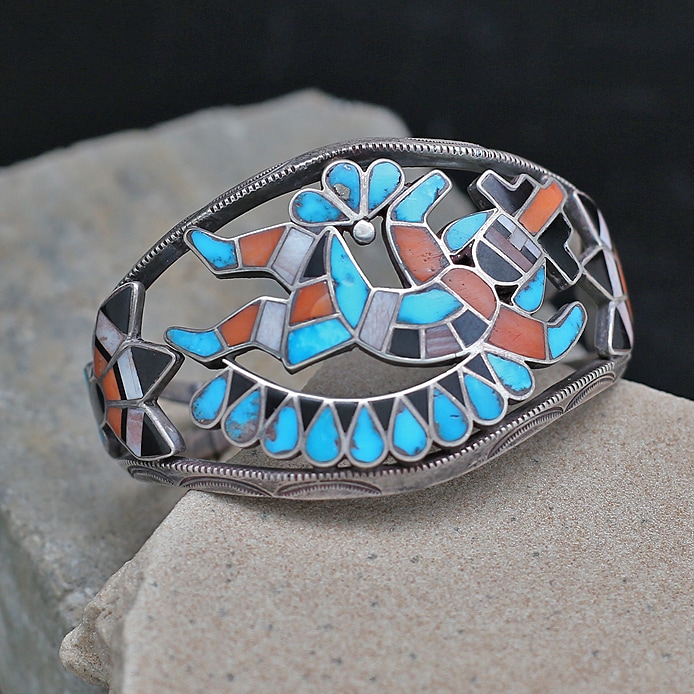 The Rainbow Man is a symbol of protection often seen on the Zuni’s war shields and is a symbol of the rainbow which represents the life sustaining rains for their agricultural importance in the arid American Southwest. The Rainbow Man was one of the first figures used in traditional Zuni mosaic inlay jewelry.

Pink Mussel Shell: A freshwater material originating in the warm waters of the Mississippi Basin, pink mussel shell has a refreshingly feminine feel.

Morenci turquoise is another American classic, highly regarded and sought after by collectors. Though the Morenci turquoise mine produces a wide range of colors from blue to green, the most desirable is a deep blue color with a heavy iron pyrite matrix and occasionally some spider webbing.

The Morenci turquoise mine is located in Southeastern Arizona. It is the by-product of a large open-pit copper mining operation and dates back to 1864. William “Lucky” Brown was offered the mining rights in the 1950s and the Brown family has worked the mine since. Though no turquoise is actively being produced at the Morenci mine, small amounts do still come to market each year from the stock that was mined previously.

Jet is a product of high-pressure decomposition of wood from millions of years ago, commonly the wood of trees . Jet is found in two forms, hard and soft. Hard jet is the result of carbon compression and salt water; soft jet is the result of carbon compression and fresh water. Native American Navajo and Pueblo tribes of New Mexico were using regionally mined jet for jewelry and the ornamentation of weapons when early Spanish explorers reached the area in the 1500’s.Today these jet deposits are known as Acoma jet, for the Acoma Pueblo