Stone Types by Area and Name 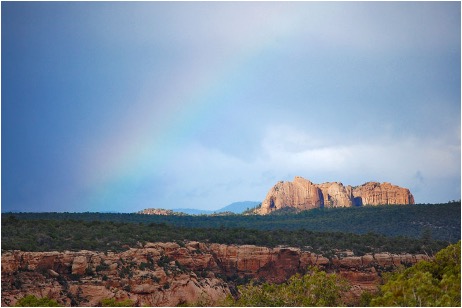 Turquoise, known as the Sky Stone by Native American Indian Tribes in the Southwest, is an ancient talisman for health and happiness. People all over the world have long been captivated by Turquoise. Other cultures believe Turquoise, one of the loveliest of gemstones, possesses protective powers. Turquoise appeals to us because every stone is unique. We value the fact that Turquoise comes in so many colors and varieties.

It is believed that specific minerals in the earth have an effect on the inhabitants that live here. A good example that most people rely on today are vitamins. Turquoise derives from Copper, Aluminium Sulphites, and Iron which wash down through the ground from rain and snow to form sedimentary deposits. These mineral rich deposits develop into Turquoise over a period of millions of years. So, there is good reason to believe that ancient healers and spiritual leaders were correct in believing that Turquoise could very well have a holistic value to the human being.

American Turquoise varies in color from different consultancies of the minerals that are in the soil above where it was formed. In general, Arizona produces Blue Turquoise and Nevada produces Green Turquoise, Colorado and New Mexico predominately produce Green Turquoise. In all areas there are deposits of the opposite color but in much smaller amounts.

American Turquoise also varies substantially from the different locations it is found. Turquoise is formed by moisture leaching down into the ground through the mineral rich soil. The liquid flows through and into crevasses and voids below the surface of the earth. Turquoise Nuggets form in a voids within clay and Vein Turquoise from in cracks and voids in hard rock.

The Kingman mine in northwestern Arizona was one of the largest turquoise mines in North America. The terms “Kingman” or “high blue” refer to the blue color usually displayed in this stone. It has become a color standard in the industry. The mine became famous for its rounded, bright blue nuggets with black matrix. Few turquoise mines produced nuggets, especially of this quality. Old natural Kingman Turquoise is rare. The Colbaugh’s own this mine and the Turquoise Mountain mine, their company name is Colbough Processing. They have recently gone back into the section of the Kingman mine and are digging and bringing our some new Natural Kingman Turquoise.

The Sleeping Beauty mine is located near Globe, Arizona. Its turquoise is noted for its solid, light blue color with no matrix. Sleeping Beauty turquoise is the favorite of the Zuni Pueblo silversmiths for use in petit point, needlepoint, and inlay jewelry. This mine is one of the largest in North America and was closed in August 2012.

Turquoise Mountain and “Birdseye” turquoise come from the same mine in northwestern Arizona near the Kingman mine. The mine was closed in the 1980s. It is light to high blue, with both webbed and non-webbed matrix. “Birdseye” describes stones from this mine that show areas of light blue circled with dark blue matrix, resembling the eye of a bird. It is a beautiful addition to one’s collection.

The Blue Bird Turquoise mine is a small “ma and pa” operation that nobody knows a whole lot about. We have however been able to back up the mines existence through several reputable gem dealers, miners and artists. We have bought around 50 lbs of the material over the years. It is wonderful medium sky blue to dark blue with quarts and ocassionally pyrite inclusions. VERY PRETTY stuff. Infact I would say it is some of the best true blue turquoise we have purchased. We first bought some at a gemshow in Durango, Colorado and since have only found it at obscure little gemshows where the true miners show up. Definately worth owning.

is a very lightweight stone comprised of fossilized coal/wood. It is grounding and balancing, and as it also carries a negative electrical charge, is good for drawing power and knowledge to the bearer. It is also helpful in stabilizing finances, and is said to soothe migraines. A highly protective stone, feminine, good for mourning & healing of grief. Helps protect against illness, epilepsy, stomach pain, colds, glandular problems, and lymphatic problems. Combined with Amber it is extremely powerful and protective.

Mines in northeast Afghanistan continue to be a major source of lapis lazuli. It is a stone prized for its intense blue color. The name Lapis Lazuli comes from the Arabic word lazward, from which the word azure comes, which means blue. Ancient Romans used to call it “sapphires,” which was subsequently applied to the blue variety of corundum we know today as sapphire.

A green gem that’s common in many areas of the world. It’s a copper carbonate mineral that was the first ore to produce copper. … Malachite forms inside limestone and is found in caverns in parts of Australia, France, and Arizona. The first deposits were found in Egypt and Israel over 4000 years ago.

A chalcedony quartz that is mined in Brazil, India, California, and Uruguay. It has a fine texture and black color; however, some onyx also displays white bands or ribbons against a black or brown background and this variety is known as sardonyx. The name comes from the Greek word onyx.

Often called spondylus princeps , is found in the sea off the coast of Baja California, Mexico. Spondylus is a Latin word meaning “spines on its back.” Beautiful oranges, reds, white, purple. This stone of the sea carries the energies of the water, cool comfort and peace of mind from the dark depths of the sea, and a sense of understanding, patience, & knowing from the rhythm of the tides.

(purple) is a rare mineral named after Ken-ichi Sugi, a Japanese geologist who first discovered the material in 1944 on the Japanese island Shikoku. … Sugilite has a vivid purple color and is usually opaque to translucent.

Manassa (King’s Mine or Lickskillet Mine)

Manassa turquoise is mined at Manassa in south central Colorado. It is known for its blue-green to green color with a golden or brown, non-webbed matrix. The Manassa mine is still in production, and owned by the King family, thus the alternate name sometimes used for this turquoise. The current owner of the Manassa Mine is Bill King. Bill is a wonderful stone cutter and was a wonderful miner. These days he is sticking more to cutting stone and having it made into jewelry. The mining at Manassa at this time is at a stand still. The Manassa mine used to be call the Lickskillet Mine in the old days. This stone is one of our favorite, the beautiful green color is VERY striking, excellent when used in gold.

Carico Lake turquoise is named after the location of its mines on a dried up lake bed in a high, cool area of Lander County, Nevada. Its clear, iridescent, spring green color is due to its zinc content and is highly unique and collectible. Carico Lake turquoise is also found in a dark blue-green color with a black or brown, spider web matrix. The Mine has been open for sometime now. A fair amount of This turquoise has been recovered. The less common lime green turquoise which is suspect to actually be predominately faustite, is very very valuable due to it rarety and demand. It is hard material. This mine is also known to produce rare psuedomorph clams that are filled with turquoise.

Fox is on of Nevada’s most productive turquoise mines. In the 1940’s, Dowell Ward purchased the old Cortez claims and developed them using the names Fox, White Horse, Green Tree and Smith to differentiate among the colors produced in the area and to create a larger perceived share of the turquoise market. The area produces a huge amount of good quality blue, green or blue-green stone with a distinctive matrix. Most of This turquoise that we have cut has been a light to medium blue with a dark color of green of blue spiderweb.

Discovered at the Dry Creek Turquoise Mine on the Shoshone Indian Reservation near Battle Mountain, Nevada in 1993. To date this is the only place it has been found. White turquoise is as rare as the sacred White Buffalo Turquoise. It is white with black and or brown matrix and many experts say it is technically not turquoise. This is because turquoise, by definition, contains copper ( it is the copper aluminum phosphate ), which is what gives turquoise its characteristic blue color. The presence of iron will shift the color toward greenish blues. Althoough Sacred Buffalo Stones resemble turquoise in hardness and will polish to a high shine like turquoise, it has no copper, thus no blue color.

The No. 8 turquoise mine in Carlin, Nevada was first mined in 1929 until its depletion. In its prime, No. 8 produced some of the largest nuggets of turquoise found. A spider web matrix of colors ranging from golden brown to black set off the unique bright powder blue background of the stone. High grade No. 8 is deep blue in color and is very rare. No. 8 turquoise has been a very valuable acquisition, rumors of new stashes of great quantity threaten the value from a collectors standpoint, if they prove to be true, of coarse the high-grade will always be very valuable. One of Cutler Edgars.

The Pilot Mountain mine is located in northern Nevada. It is still producing and is worked by the Ottesons and owned by Nevada Turquoise Company. The stone is highly admired for its deep blue-green colors. In addition, it can show light blue to dark green colors on the same stone. This graduation in color is unusual and makes the turquoise very collectible. The matrix is black to golden brown. Pilot Mountain is a hard stone and takes a good polish. Most Pilot Mountain comes in thin viens as shown on the cab to the left, but we have recently discovered some thick vein.

Royston is a district in Nevada consisting of three turquoise mines: Bunker Hill, Oscar Wehrend, and the main producer, Royal Blue. Royston is known for its beautiful colors ranging from deep green to rich, light blues set off by a heavy brown matrix. The Royston district is still producing some turquoise of high quality. It ranges from a 5-6 in hardness for the high grade. This is one the best selling stones for our line of jewelry. This Turquoise is being min

This is simply when a stone cutter takes natural Vein Turquoise (Turquoise in its natural host rock) and cuts in the direction to create the vein going through the rock like a ribbon or splotches of turquoise in the host rock like a Boulder Opal. In the olden days stone cutters would take the is Ribbon turquoise or Boulder Turquoise, which they called “Saw Rock” and they would cut the thin vein out for a pure Turquoise stone. If the Turquoise vein was too thin or spotty, like the material used in boulder turquoise or ribbon turquoise stones, the miners would through it in the tailings pile. Most Natural Turquoise comes in the vein form as opposed to nuggets or nodule.Most of the Boulder Turquoise is found in the famous Royston and Pilot Mountain Mines in Nevada