Vintage Zuni belt buckle by Mike Simpicio. Circa 1960’s. Handcrafted in solid sterling silver with Red Branch Coral and Morenci Turquoise. Great detail in his stamping and leaf work. Measuring 3-1/4′ x 2″. It has a 1-1/2″ opening for a belt. 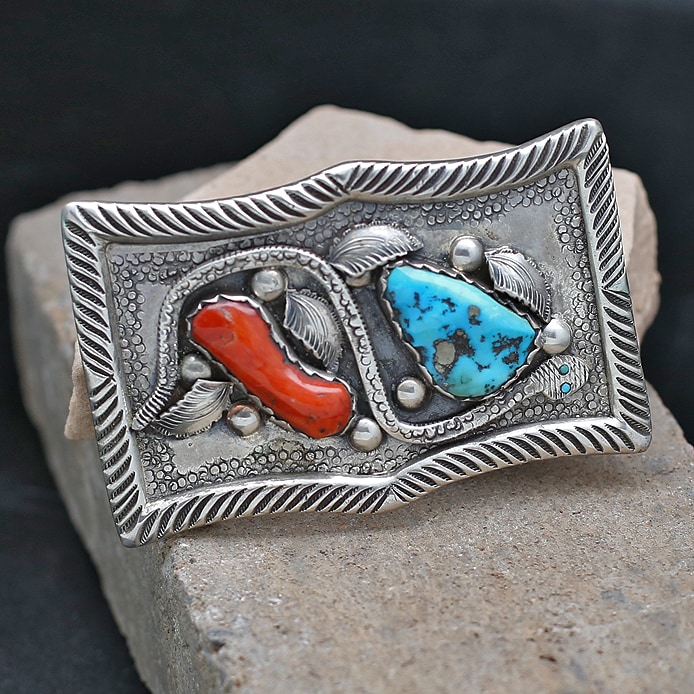 Mike learned his style from his brother Dan Simplicio who in turn learned jewelry making from his uncle, Juan Dedios. He worked at C.G. Wallace’s trading post at Zuni, collaborating with master stonecutters such as Leekya Deyuse, Teddy Weahkee, and Leo Poblano.  Simplicio family was the first to use red branch coral in its natural form, and probably the first jewelry maker at Zuni to use gold.  He introduced undulating leaf motifs into Zuni art, possibly inspired by European art and design he saw during his service in World War II. Both brothers are known for combining natural branch coral and turquoise with innovative designs that frequently included elaborate leaf work.

SILVER, for example 99.9% pure silver, is relatively soft, so silver is usually alloyed with copper to increase its hardness and strength. Sterling silver is prone to tarnishing, and elements other than copper can be used in alloys to reduce tarnishing, as well as casting and fire scale. Such elements include germanium, zinc, silicon and boron.

When Europeans arrived in the New World, they brought with them “blood coral” from the waters of Spain and Italy.

Morenci turquoise is another American classic, highly regarded and sought after by collectors. Though the Morenci turquoise mine produces a wide range of colors from blue to green, the most desirable is a deep blue color with a heavy iron pyrite matrix and occasionally some spider webbing.

The Morenci turquoise mine is located in Southeastern Arizona. It is the by-product of a large open-pit copper mining operation and dates back to 1864. William “Lucky” Brown was offered the mining rights in the 1950s and the Brown family has worked the mine since. Though no turquoise is actively being produced at the Morenci mine, small amounts do still come to market each year from the stock that was mined previously.