Lapis Lazuli – Mines in northeast Afghanistan continue to be a major source of lapis lazuli. Important amounts are also produced from mines west of Lake Baikal in Russia, and in the Andes mountains in Chile. Smaller quantities are mined in Pakistan, Italy, Mongolia, the United States, and Canada. It is a stone prized for its intense blue color. The name Lapis Lazuli comes from the Arabic word lazward, from which the word azure comes, which means blue. Ancient Romans used to call it “sapphires,” which was subsequently applied to the blue variety of corundum we know today as sapphire.

Albert Jake: was born in 1959 in the Zuni Pueblo south of Gallup, New Mexico.  He learned silversmithing from his parents. He specializes in traditional set stones and cluster jewelry with intricate stamp work. He has been smithing since 1987.  He also creates sand-paintings and makes pottery. During the summers he works as a forest fire fighter. He lives with his wife and two daughters today in Rahmah, New Mexico, near the Zuni Pueblo.

Ask a Question About BC 1324 Albert Jake lapis ring 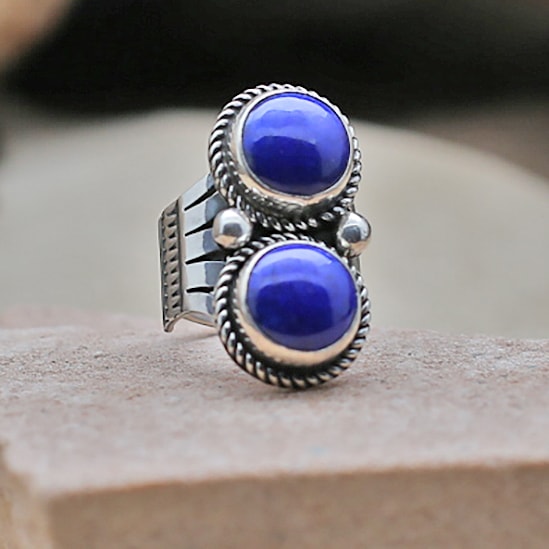 Navajo handcrafted 2-stone lapis ring. Created by renown artist Albert Jake ( Albq, N.M.) Set in solid sterling silver and genuine Lapis. This ring is well crafted with details through out. Measuring 1″ 1/4 in length with a width of 3/8″. The tapered shank makes this one easy to sizer to fit any finger. A beautiful ring.