Large oval pendant with high grade Kingman turquoise. Crafted by renown Navajo artist Leonard Nez. Known for his unique overlay patterns he cuts into the silver. His patterns evoke the designs of eagle feathers and clouds. Measuring 2″1/2 in total length with a width of 1″1/4. 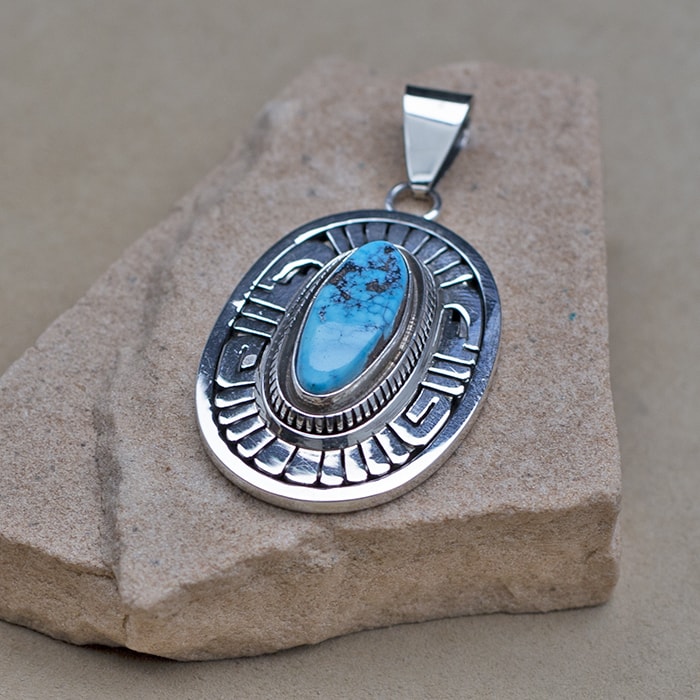 Leonard Nez, Navajo, is from Canoncito, New Mexico. Leonard is a master silversmith who works both in silver and gold and has won awards at some of the most prestigious competitions. Leonard Nez is a quiet and deeply spiritual man who finds his inspiration from the Lord, his daughter and from the people who appreciate his work.

However, modern production of turquoise dates to the 1880’s when James Haas rediscovered the area. Natural Kingman Turquoise ranges in color from light to very dark blue and sometimes tints of green. Matrix can range from white, light brown to black and frequently flecked with pyrite and occasionally quartz. The most famous stones from this mine are rounded bright blue nuggets with black matrix. Few turquoise mines produced nuggets, especially of this quality. In its high-grade form it has always been considered among the top-quality American turquoise. This high blue color has become a “color standard” in the industry, reflected by the name “Kingman Blue”. However, much of the turquoise from Kingman occurs as seams, masses, and veins, rather than in nugget form. Besides the nugget form, the most desirable Kingman turquoise is a deep blue with molybdenum pyrite; also, deep blue with pyrite as well as in a “bird’s eye” pattern with “water web” matrix.