Santa Domingo artist Daniel Coriz is known for his ability to string the most vibrant colors and unique designs into his necklaces. This is a great example of this. Measuring 32″ with a 3″ chain extension, making this a very versatile length necklace. 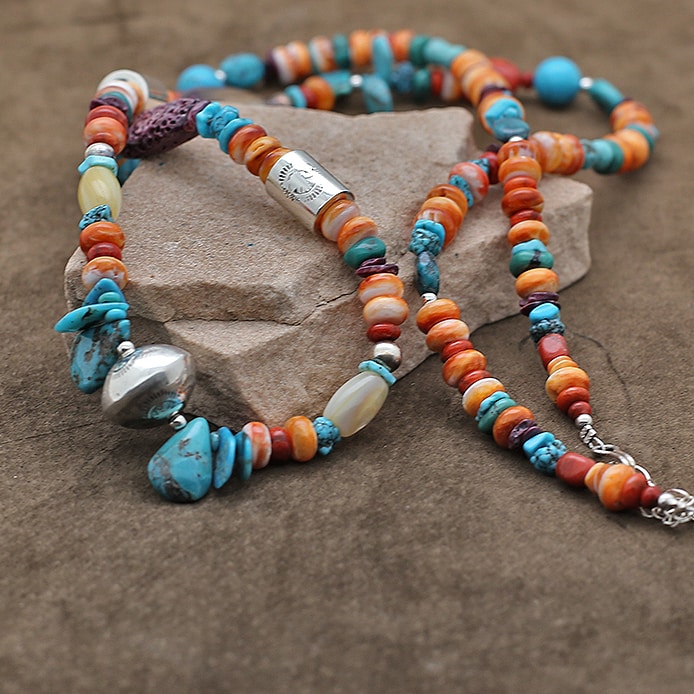 In the 17th century, the Spanish conquistadors named the pueblo as Santo Domingo. Its earliest recorded name was Gipuy. According to Pueblo Council members, the local name in their Keres language has always been Kewa. In 2009, the pueblo officially changed its name to Kewa Pueblo, altering its seal, signs and letterhead.According to the Pueblo of Acoma’s Keres Online Dictionary, the Western Keresan-name for the Pueblo was Díiwʾi and for its people therefore Dîiwʾamʾé.It is located 25 southwest of Santa Fe , N.M.

SILVER, for example 99.9% pure silver, is relatively soft, so silver is usually alloyed with copper to increase its hardness and strength. Sterling silver is prone to tarnishing, and elements other than copper can be used in alloys to reduce tarnishing, as well as casting porosity and fire scale. Such elements include germanium, zinc, platinum, silicon, and boron. Recent examples of alloys using these metals include argentium, sterlium, sterilite and silvadium.

However, modern production of turquoise dates back to the 1880’s when James Haas rediscovered the area. Natural Kingman Turquoise ranges in color from light to very dark blue and sometimes tints of green. Matrix can range from white, light brown to black and frequently flecked with pyrite and occasionally quartz. The most famous stones from this mine are rounded bright blue nuggets with black matrix. Few turquoise mines produced nuggets, especially of this quality. In its high-grade form it has always been considered among the top quality American turquoise. This high blue color has become a “color standard” in the industry, reflected by the name “Kingman Blue”. However, much of the turquoise from Kingman occurs as seams, masses and veins, rather then in nugget form. Besides the nugget form, the most desirable Kingman turquoise is a deep blue with molybdenum pyrite; also, deep blue with pyrite as well as in a “bird’s eye” pattern with “water web” matrix.

The mine is currently owned & Operated by the Colbaugh family’s company, Colbaugh Processing. While old natural Kingman turquoise is rare, they have recently gone back into older sections of the Kingman mine and are bringing out some new natural Kingman Turquoise. Although there are quantities of this fine natural deep blue turquoise available, the largest percentage of turquoise mined at Kingman is being treated or stabilized. There are several other names for the turquoise coming out of the Kingman mining district: Ithaca Peak, Old Man Mine, Kingman Duval, Courtland, The Wall and Turquoise Mountain, just to mention a few.

Living Spondylus shells are, indeed, very spiny, but the polished product looks very smooth, with some of its color variation strongly resembling that of the Blood Oyster. The resemblance is strong enough that it’s important to ask, when purchasing these materials, if they’re from Blood Oyster or Spiny Oyster. Artists often use Spiny Oyster as a substitute for Blood Coral. Although not nearly as rare as the Blood Coral or Rose Coral, divers collect Spiny Oyster by hand, making the work laborious and relatively expensive, with some risks.N18

The most commonly used Spondylid Bivalve shell colors include orange, reds, and purples and may include distinct striations and color variations. One also finds pink, red, brown, yellow, orange, and white on the market. The Yellow Spiny Oyster’s especially rare.

In the American Oceans, the Spondylids occur along the North American coasts, as far north as North Carolina, on the Atlantic Coast, and northwestern Mexico, on the Pacific Coast. It develops in waters to South America. The Orange Spiny Oyster occurs in shallow to moderately deep waters, where snorkelers and scuba divers readily harvest them. Purple Spiny Oysters grow in deeper water, making them more difficult to find and harvest.