One of the finest examples of a handcrafted bracelet we have to offer. The artists name is Delbert Gordon. He is known for his silver working abilities and this is no exception. Set in solid sterling silver. He has used multiple methods to craft this piece all entirely by hand. Measuring 1″ in width and tapering down to 3/4″, this is a medium sized bracelet. With its inside measurement of 5″-1/2 and a 1″-1/8 opening , it is easily shaped to most wrists. Please call with any questions about this wonderful bracelet. 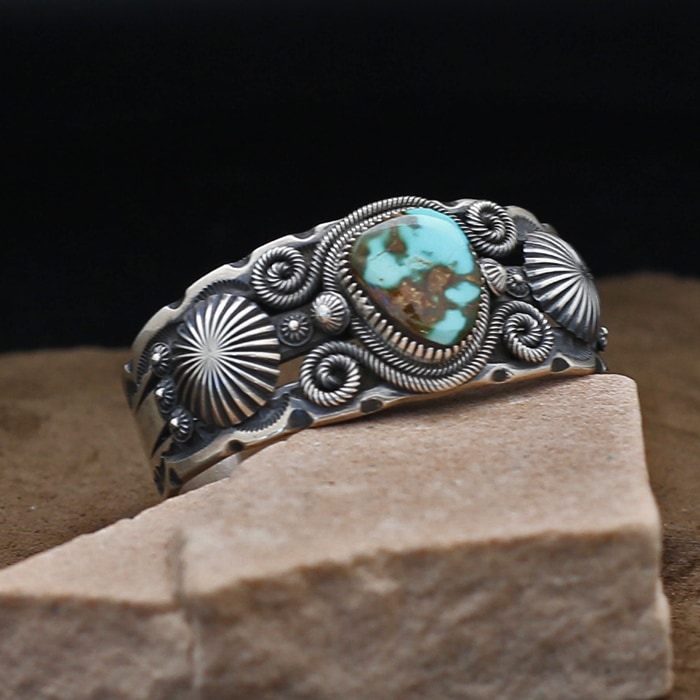 Royston Turquoise: A district in Nevada consisting of three turquoise mines: Bunker Hill, Oscar Wehrend, and the main producer, The Royal Blue. Royston is known for its beautiful colors ranging from deep green to rich, light blues which are set off by a heavy brown matrix. The Royston mine is producing a little high-grade turquoise today, operated by the Ottison family. They process most of their material into finished cabs and allow very little rough to come onto the market. This controlled output has raised the price of this material considerably in recent years.

Delbert Gordon: Originally from Houck, Arizona, became a silver smith while working for a trader in Gallup. Over the years, he has created some of the most beautiful traditional Navajo jewelry in existence. He has been a great mentor to many younger smiths, including his nephew, Derrick Gordon.